Brothers George and Manolis Alpogianis, owners of America’s Dog & Burger, are in the midst of their biggest transformation yet. There’s a new slimmed-down menu with a focus on higher-end ingredients, a new name to reflect a bigger focus on burgers and a plan to expand across the U.S. (Phil Velasquez / Chicago Tribune)

Brothers George and Manolis Alpogianis opened their first America’s Dog restaurant in 1996 on Navy Pier, with a menu based on a cross-country road trip they spent tasting hot dogs outside of the celery salt-sport pepper-no ketchup world of Chicago.

Now with four Chicago locations, the brothers are in the midst of their biggest transformation yet. There’s a new slimmed-down menu with a focus on higher-end ingredients, a new name to reflect a bigger focus on burgers and a plan to expand across the U.S.

The restaurant officially unveiled its new name, America’s Dog & Burger, last week — a nod to the increased presence of hamburgers on the menu. Customers tend to view hamburgers as more of a dinner option than hot dogs, the brothers said.

A hot dog is prepared April 4, 2017, at the America’s Dog & Burger restaurant in Chicago’s Loop. The chain, formerly just America’s Dog, has a slimmed-down menu and a new name as its owners launch an expansion plan. (Phil Velasquez / Chicago Tribune)

The new menu only has two hot dogs and three burgers from its previous incarnation and brings in on-trend ingredients like ghost peppers and hardwood-smoked bacon.

“We focused on how we could do this if (the restaurant) were 600 square feet in a food court,” Manolis Alpogianis said, and “everything’s about bacon and bourbon and cheese these days.”

The pair first considered ways to expand the business about four years ago and started the ball rolling toward developing a franchise operation about a year and a half ago.

“Our family has been entrepreneurs for about three generations in Chicago and sitting idle isn’t one of the things we’re very comfortable with,” Manolis Alpogianis said. 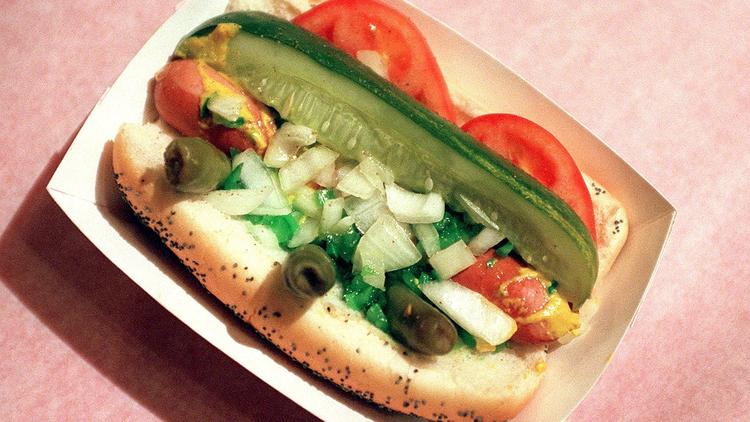 Whether you prefer your hot dogs delivered with a smile or like to be sworn at (check out The Wiener’s Circle); there’s no denying the comfort eating one brings. Here, find 12 places in and around Chicago where a satisfying dog can be purchased. Drool on.

The brothers said they aim to have 30 locations over the next several years across Chicago and the suburbs, northern Indiana and southern Wisconsin. Within five years, they plan to have a total of 70 locations across the U.S., with markets like Arizona, Texas, California and Washington, D.C., as prime targets.

They expect to have a new lease signed this month, and they are vetting three others, Manolis Alpogianis said. Each franchisee is expected to operate multiple restaurants.

Although they have big plans to expand the chain, the five-year time frame is intended to offer slower, more deliberate growth. 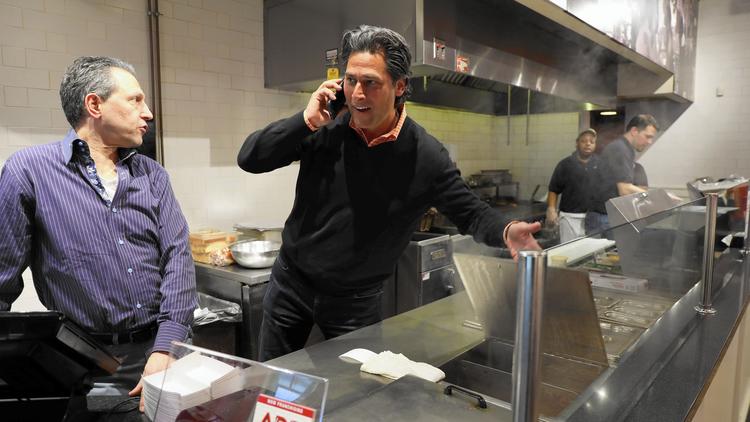 Brothers George, left, and Manolis Alpogianis stand behind the counter April 4, 2017, at their America’s Dog & Burger restaurant in Chicago’s Loop. The brothers, who founded America’s Dog in 1996 and now have four locations, are franchising their renamed brand and hope to expand to 70 locations across the U.S. within five years. (Phil Velasquez / Chicago Tribune)

“My brother and I never wanted to lose where we came from and what we were: all about the quality and the service,” George Alpogianis said. “That’s one thing that we’ve really prided ourselves on. And it’s tough. If you grow too quick, you’re running and you can trip and fall and that’s not what we wanted to experience.”